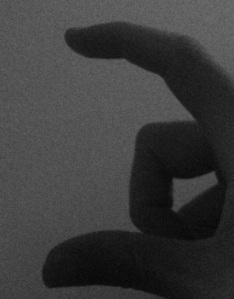 She thinks for a moment; not about the stew but about the story that he’s started. “So he’s dapper,” she says, and he frowns. “He wears office clothes then,” she says, and he nods. “And he comes in to the shop every day, almost, after work, at four o’clock, or just after, and he always buys the same thing.” His eyes dart up briefly from his plate, he nods and carries on eating. She wants to prolong the story. She could go on like this for hours.

“Does he buy pornography?” she asks, and he says, “No,” through a mouthful of food.

“No pornography?” she says, sure that she was right.

“No,” he says again. He wipes his mouth from side to side with the white paper napkin that has been tucked under the rim of his plate. Then he looks at the napkin and pushes it back beneath the plate.

“Don’t tell me,” she says, knowing that he won’t. She watches him as he finishes his food, and then she starts again on her own meal. As she eats, she frowns to let him know that she is still thinking about his story. She looks at a dollop of gravy on the edge of her plate, spilled when she was ladling, and wonders if he is watching her the same way she watched him.

“Each time, the same thing,” he says, as if he’s worried that she might have drifted. How could she drift?

“Tell me what he buys,” she says, eager now to hear the next part of the story. Ali will be tired soon, and he’ll go to bed, and then he’ll be up again before five, so she won’t see him until tomorrow night, and tomorrow night he might not feel like talking this way.

“Two small bottles of vodka,” he says, looking evenly at her. “The smallest ones we sell. You know the ones.” He holds his index finger and thumb apart to show the size.

She frowns, purses her lips, says, “It would be odd if I came in and bought them!”

His face looks heavy and old. She hadn’t noticed earlier. An effect of the candlelight, perhaps; though she’d always believed candles to be flatterers of the appearance.

“Yes, I think so. You’re right.” His eyes sweep her face. He laces his fingers. “But it’s not so simple.”

2 thoughts on “The Shopkeeper – part IV”

I acknowledge the traditional custodians of the lands on which I live and work. I pay my respects to their cultures and stories, and to all their elders, past, present and emerging.