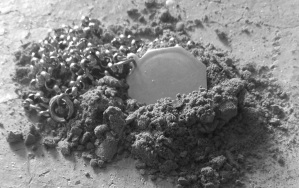 “The first time he came in, he told me that he was buying the bottles to give to someone at work, to add to a farewell hamper. He told me about how they had bought this fellow enough gifts to fill a box, that they were going to wrap it all up in cellophane and ribbons, but they still had a small amount of money left in the collection. Everyone likes a drink, he said. And I agreed.”

“I don’t like a drink,” says Julie, but he looks at her as if that doesn’t count. “And neither do you. So why did you agree? You’re everything to everybody, sometimes,” she says. Everybody except me, she thinks. “Go on,” she says.

“He said that he thought vodka was probably the cleverest thing to buy. He used a word to describe it. An unusual word. I can’t recall it.”

He pauses, as if he’s seeing the man’s face again. “He was giving me all this detail. And there was no reason for his story not to be true, back then. I think that I believed him.”

He begins to finger the pendant on his necklace. A delicate ornament – his father’s. He never takes it off. It reminds him of devoutness, and faith. An old country. “Unpronounced,” he says, after a while. “He said that vodka is unpronounced.”

“I think so.” He lets go of the pendant, as if it had delivered the word to him. “He told me that the fellow in question, the leaver, he said that he worked in accounts, and I wondered why he was giving me so much information. When it came to him handing over the money and taking his change, there was a tremor in his hands. I didn’t make anything of it.

“The next time he came in he bought the same thing. Then I knew. This time, he didn’t bother with reasons. It was as if he knew that I understood, so there was no point in trying to pretend. Why should he tell me another tale? It would have been pointless. It felt like he was trusting me with something. Entrusting me. I was pleased that he wasn’t inventing scenarios. Now he just comes in, we talk, he buys the vodka, we talk some more, he leaves. It’s all okay. But I feel like I’m conspiring in something.”

Julie chews slowly, and stares into Ali’s face, to delve behind his words. She doesn’t want to interrupt him; a careless comment might splinter the moment, like the arrival of the night bus in their early days together.

“When he pays, it’s like he’s trying to control his hands. Every movement is measured and concentrated.” He holds his right hand over his plate, palm down and parallel to the table top, fingers spread; he holds it steady, as if confirming that it’s possible. He makes a fist, then spreads his hand again, then puts it away beneath the table. “And despite the clothes, he looks shabby. Scuffed shoes, untrimmed hair, straggly. He smells of vinegar.”

“Yes,” he says. “It’s true. Anyway, these things, his appearance, his scent – they’re not important. It’s not why I’m telling you this.”

12 thoughts on “The Shopkeeper – part V”